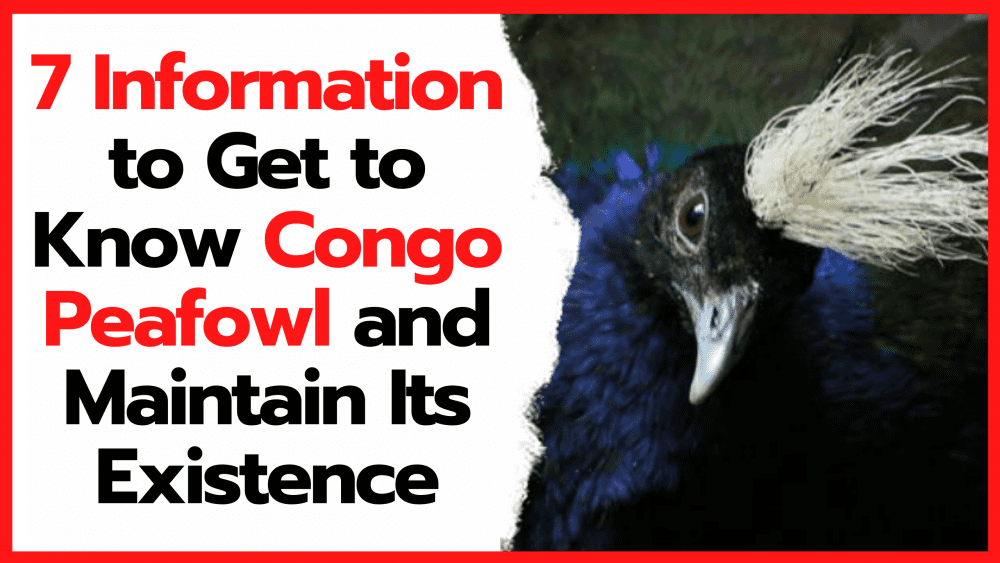 Congo peafowl facts – Do you know that Congo peafowl was discovered by an American Ornithologist named Dr. James Paul Chapin? From three types of peafowl, Congo is the most different one. They look very different from their Asiatic cousins, Indian peafowl and Green peafowl. They are quite smaller, only reaching a total length of up to 70 cm. The males weighs up to 1.5 kg while the females 1.2 kg.

1. Facts of The Congo Peafowl Discovery

According to the data from waza.org, Dr. James P. Chapin is a zoologist at the Royal Belgian Congo Museum in Tervuren who discovered the Congo peafowl. When he visited Tevuren Museum in 1934, he saw two stuffed birds with similar feathers labelled ‘Indian peacocks’. Then, he realized that that this birds were actually specimens of a new species. He called it ‘Congo’. After that, in 1935 Dr. James was able to locate and bring back seven specimens of the ‘mbulu’ as the Congolese called them so.

2. The Differences Between Male And Female Congo Peafowl

Congo peafowl is a colorful bird, and the only true pheasant native to Africa. This is why people usually call it African peafowl. This bird is also known as the ‘mbulu’ by the local people. This is one of the three species of peafowl from Asia. From those three species of peafowl, this bird is the most different one. They have much shorter tail without ocelli about 23-25 cm.

The male Congo is mostly dark blue all over with a metallic green and purple tinge. Meanwhile, the female is also very different from Asian peafowl. She has a bright chestnut breast, underparts and forehead, while the back is metallic green.

3. The Uniqueness of Its Habitat.

This bird is only found in the Democratic Republic of Congo, mainly in its eastern half. This is unique because other types of peafowl can be found outside of their natural habitat. Congo peafowl inhabit primary lowland rain forest up to an altitude of 1200 m. Lowland rain-forest is the bird’s overall habitat, but it seems to prefer specific areas within the forest. According to arkive.org, many different forest types are used, but this ground-dwelling species has most commonly been observed in dry forest with a relatively open floor, mainly on watersheds.

Example of Congo peafowl habitat : Slopes between streams, with an open understroy, high canopy, and plenty of litter on the forest floor.

Read also :
What Do Peacocks Eat? : The Food Differences Between Peacocks Living In Native Habitat And Peacocks In Captivity

4. The Diet of Congo Peafowl

Congo peafowl are mysterious birds. It makes them difficult to study due to their remote location and the fact that they are scattered widely in their habitat.However, it seems that this bird seems to be common peafowl that is omnivorous. They can eat everything they can eat, fruits, seeds, plants, insects, small reptiles, etc. More information, you can open article: what do peacocks eat?Then, for newly hatched Congo peachicks rely on insects for their initial diet. They usually eat large amounts of insects in their first week of life, presumably for an early spurt of protein for effective growth.

The females usually reaches sexual maturity in around a year, while the males take twice as long to reach their full growth. Their eggs clutches are small at two or four eggs per season. Then, the peahen usually incubates their eggs alone until hatching into chicks after 26 days.The first young start to be spotted between January and February, suggesting that the incubation should occur in September and October. The peahen usually locate the nest close to the ground in a tree or bush. Usually they construct it first during laying season and first days of incubation. After that, the male will take over the rest of the process.

Sadly to say that the Congo peafowl now is currently endangered. Both hunting and habitat loss are the reasons of that condition. The irresponsible people take the eggs most from the nests for food, while they capture the birds using snares. Even they catch them in snares left for other animals such as antelopes, tigers, or other carnivores, then are subsequently eaten. Then, they will also shoot the bird for food as well.

Many different pressures on the native environment are the cause of the habitat loss. The clearing of forest for subsistence agriculture is one example of these threats. Then, mining and logging are also hazardous. The establishment of mining camps will possibly create stronger need for food. And of course, it will lead to more hunting in the area on top of habitat destruction.

7. Conservation Programs To Maintain the Existence of Congo Peafowl

Due to the habit loss and over-hunting, Congo peafowl status is vulnerable, with an estimated population of under 10,000 individuals in the earth. In 2013, another source mentions that in the wild population, the estimation of this bird is between 2,500 and 9,000 adult individuals.Due to this reason, the captive breeding programs were established in the Belgian Antwerp Zoo and at Salonga National Park. Besides, the conservation programs also currently exist in the Maiko, the Okapi Wildlife Reserve, and the Kahuzi-Biega National Park.