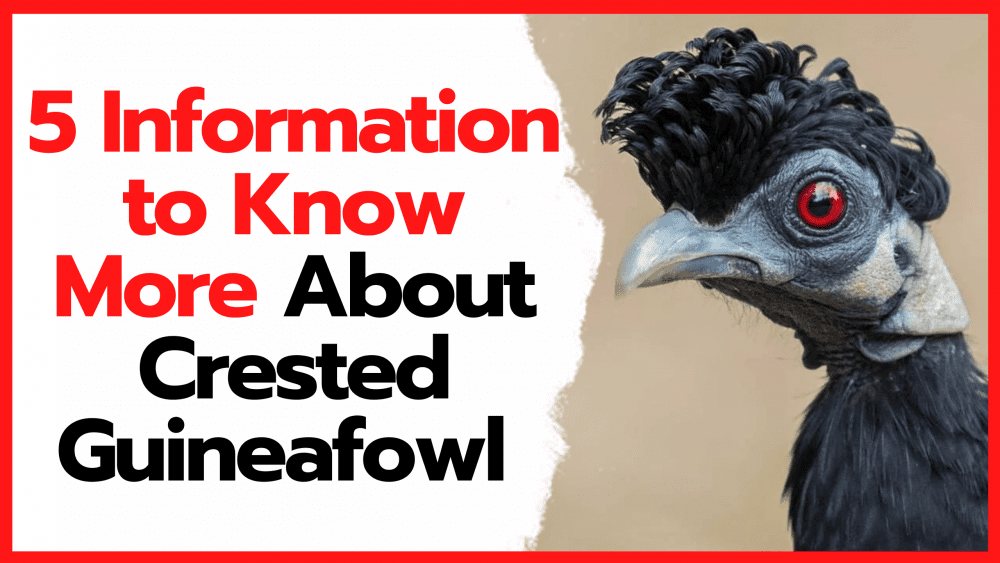 Crested guineafowl – Distinguished from other guinea fowl types by their thick and curled crests, the crested guinea fowl is native to damp forests of tropical Africa. They are growing in popularity in avicultural circles since they do well in mixed aviaries, and are not as noisy as the other guineafowl types, especially the vulturines type. Well, do you need more information about this bird?

Here is the detail scientific classification of this bird :

Let’s Get To Know The Guinea Fowl Bird First!

The guinea fowl belongs to the Numida family that is related to the pheasants, turkeys, and other game fowl. These peculiar looking birds are popular with their great ability to secure the garden or farm. The guinea fowl is able to co-exist with chickens, but you should pay attention to the male guinea fowl. Why? Because they can become very territorial and will run off any roosters in your flock. Then, if you decide to keep only guinea fowl, it’s better for you to provide them 2-3 square foot space per bird. This bird likes to be free-ranged.

Crested guinea fowl is the most aggressive type among others and should not be considered ‘house-pet’.  Due to their aggressiveness, crested guinea fowl tend to make the best guard animals and will chase intruders away, sometimes even their owner.The crested guinea fowl are found in the open forest, woodland and forest-savanna mosaics in sub-Saharan Africa. The bird have bald head and necks except for the curly feathers on the top of their head. They are dark in color, often with a chocolate brown tint, and have spots throughout. The total length of this bird is approximately 50 cm while the weight is about 721 to 1,543 g.

Crested guineafol has dark grey to black plumage with white spots. The head and neck are bare except for a mop-like crest of black feathers on the top of the head. Then, their skin around the eyes is red while the rest of the neck is blue.

This bird inhabit central parts of Africa, ranging throughout all the forest territories, as well as a handful of regions in Southern Africa. More specifically, this bird is spread in Africa, from Senegal in the west to southern Somalia, south through eastern Kenya to central Tanzania, Mozambique and Zambia.

This bird is terrestrial, social birds which are generally found in the flocks of roughly 20 that, due to their non-territoriality characteristic, possibly can include a variety of other bird species as well.

This unique bird is fairly talkative in the groups, usually making soft ‘clucking’ noises as they search for food by scratching though the dirt like chickens. Crested guineafowl is a non-migratory species but they can travel considerable distances searching for food. Even, there has been a documentation in which they follow monkey troops through the forest for dropped fruit.

Furthermore, as crepuscular, this bird is primarily active in the early morning and early evening.  The crested guinea flock retires to the shade during the heat of the sun, usually in the afternoon. Then, they resume the search for food until just before dark when they head up to the low branches to roost for the night.

The Breeding of Crested Guinea Fowl

This species is monogamous with probable strong and long-lasting pair bonds. Cited from itsnature.org, when mating season comes, the males begin their rut dance to impress the female. If successful, the new pair leaves the group and find a suited place for nesting.

The female creates the nest by making a shallow depression in the dirt, sometimes lined with vegetation or feathers, and incubates her eggs on her own while the male stands guard.

The female usually lay three to four eggs in the nest, which are then incubated for 25 to 28 days. When they young guineas hatch, both parents start feeding them. Then, in 15 until 20 days, the young guineas (usually called keets) can already fly. The birds will return to the larger flocks when the keets are mature enough to fend for themselves.

Another Type of Guinea Fowl That is Equally Beautiful

Maintaining guinea fowl in addition to filling your back garden, they can also be a guard alarm for you and your other livestock. Especially the type of helmeted guinea fowl which has a loud and unique sound. Besides, there are types of guinea fowl that you can make choices.

Moreover, guinea fowl bird comes in a variety of colors such as pearl, white, royal purple, coral blue, chocolate, bronze, and pied. However, not all of those colors are recognized in the official standards

It resembles some subspecies of crested guineafowl, but has a straighter and higher crest, and relatively long wttle on either side of the bill. This bird is mainly found in central Africa, but the information about this bird is so little.

This bird is mainly found in West Africa. According to the International Union for Conservation of Nature, it is considered a vulnerable bird due to their habitat loss.

This bird has a very distinctive black crest on the top of head, the form of which varies from small curly feathers to down depending upon species, ans which easily separates it from the other species of guineafowl, except the plumed guineafowl. Yes, that’s right. The names ‘crested’ and ‘plumed’ are often misapplied across the species. The plumed guinea fowl and crested guineafowl have tufts of black feathers on their heads.

Known as the largest of the guineas, this bird has a very stricking appearance, and can become quite tame. But they need large groups to thrive.

This bird is categorized as the most common domesticated guineafowl which has central knob on the skull leading to the ‘helmet’ appearance.