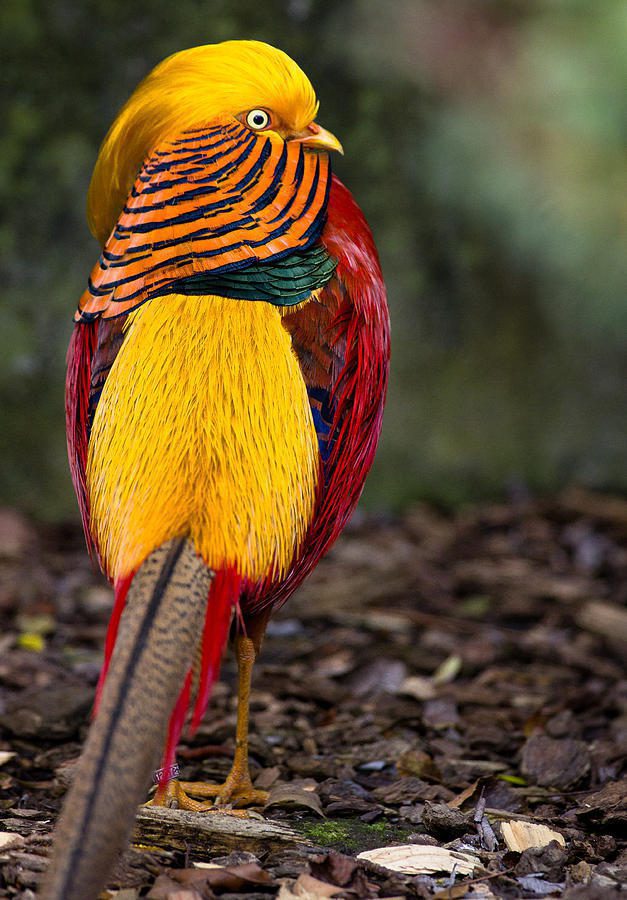 Golden pheasant – Known as one of the most beautiful birds in the world, this bird has successfully captivated many people with their pure beauty. In this article, you are about to discover golden pheasant facts along with some information that you may need to know about this bird. Let’s find out there!

Golden pheasant is one of the most popular of all pheasant species kept in captivity due to their beautiful plumage and hardy nature.

What Is Golden Pheasant?

Golden pheasant (Chrysolophus Pictus) or people usually call Chinese pheasant is a kind of gamebird of the order Galliformes and the family Phasianidae.  This is one of the most popular species of pheasant that is native to the mountainous forests of Western and Central China. Some sources mention that they originate from mainland China, precisely on the Tibetan plateau. However, the breeding of this species now has been spread in Ameria, Europe, Australia, New Zealand, and other countries.

The males of this bird is one of the most brilliantly colored of all birds. They have special characteristics if you compare with the females. The golden-yellow crest with a light tinge of red at the tip makes the males look so beautiful and charming.

Moreover, the golden pheasant lifespan in the average is 5 – 6 years. Nevertheless, if you give them good take care, the captive birds can live 15 or even until 20 years.

You can easily recognize the male golden pheasant by their bright coloring. They also have a golden crest tipped with red that extends from the top of their heads, down their necks. Besides, they have bright red underparts, dark wings and a pale brown, long, barred tail. Their rumps are gold rumps, the upper backs are green, and eyes are bright yellow with a small black pupil. The face, throat, and chick are a rust color and their wattles and orbital skin are yellow. Their beak, legs, and feet are also yellow. So charming, isn’t it?

The female golden pheasant is much less showy, with a duller mottled brown plumage.  They are less colorful and more duller than the males. They have pale brown face, throat, breast and sides. They also have pale yellow feet and are more slender in appearance. Of course if you compare the males and the females, you will see that the most stunning color is the male. This is why many people get already attracted with the males due to their perfect color.

The male golden pheasant is one of the most beautiful birds in the world. This bird shows you the beauty of a God’s creature.

Golden pheasants are quite timid. They like to hide in dark, dense forests and woodlands during the day and then roost in very high trees during the night. They often forage on the ground despite their ability to fly.

Well, little is known about their behavior in the wild since they are difficult to spot, especially  the males. According to animal corner, the best time to observe this bird is should be very early in the morning when they may be seen in clearings.

Where Do Golden Pheasant Live?

The golden pheasant habitat is dense forests and woodlands and also sparse undergrowth. They feed on the ground on grain, leaves, and also invertebrates where they can find all of them easily there. Besides, they would like to find the tree branch for them to roost at night.

Even though this is a species of bird, the gold pheasant rarely fly. So, you will not get easy to see the golden pheasant flying because they much prefer to run. However, if something surprises them, they can suddenly burst upwards at great speed, with distinctive wing sound.  For example: when the bird is foraging and get startled with something, at that moment they will fly as high as possible.

What Does Golden Pheasant Eat?

In the wild, this bird enjoy eating seeds, shoots, berries, leaves and insects. If you keep this bird at home, you can give more golden pheasant care. We recommend you to provide the commercial diet of game bird feed as well.

The vocalization of this bird includes a ‘chack chack’ sound. The males have a distinctive metallic call during the breeding season.  They will emit a distinctive whistle which aims to attract the female attention. Let’s hear their sounds:

When Do Golden Pheasants Lay Eggs?

The female (hen) golden pheasants lay around 8 – 12 eggs at a time and then will incubate them for around 22 -23 days.  The chicks fledge after 12 – 14 days. The males get their bright during their second year of life but are sexually  mature in the first year.

This bird is classed as ‘Least Concern’ by the IUCN (The International Union of Conservation of Nature). It means that there are healthy populations in the species’ natural habitat.

For further information, please enter your comment in the leave a reply box below