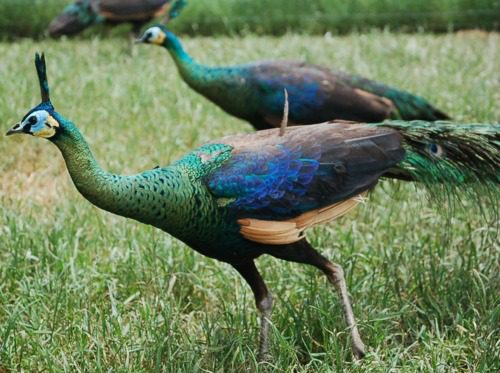 The male green peafowl (peacock) can reach up to 3 meters long including the train, and weigh up to 5kg. The male has a long, green and tightly bundled head crest which is held erect. The neck and head have dark bluish-green feathers and metallic sheen. The wings are dark green and blue with pale brown flight feathers.

The female peafowl (peahen) normally has different physical characteristics– yes peacock and peahen are different. Please open female bird to see the complete detail. Well, the females are not brown like the female Indian peafowl, but are a less vivid shade of green. The female averages 1.1 meter in length and weighs up to 1.1 kg. One more thing, all female peafowl always lack the train. And this is what happens to the female green peafowl too. They have tail but have no train.

There are 3 subspecies of the Green Peafowl:

This is the most brilliantly coloured among their subspecies. They have metallic golden-green neck and breast with cerulean blue wing coverts. It is an endemic to th east and western ends of Java, Indonesia.

This subspecies are from northeastern India and northwestern Myanmar that is now believed to be extinct. however, the sightings have sometime been questioned as feral or escaped birds. They have matte gun metal-blue to olive-green neck and breast. They are more black on the wing-coverts and outer web of secondaries.

This subspecies is the most common and has the widest distribution, from east Myanmar to Thailand, Yunnan province in China and Indochina. Moreover, they are huge, with long neck, glossy green wit blackish scales, long crest and long train with large ocelli.

WHERE DO GREEN PEAFOWL LIVE?

The green peafowl habitat is mostly found in open woodland and forest edges in Java, but they usually avoid the dense rain-forest.  Moreover, you can also find them among bamboo, Savannah, scrub, on grasslands, and farmland edge.

According to wikipedia, this peafowl species was widely distributed in Southeast Asia in the past from eastern and north-eastern India, northern Myanmar, and southern China, extending through Laos, Thailand into Vietnam, Cambodia, Peninsular Malaysian, and the Java Island.

For more information, the peafowl are mainly ground-dwelling birds preferring forests and also farmland. Actually, they can also live in bush lands and rain-forests. Many of them will like to nest on the ground to look for some food, while the others will roost in trees to avoid the predators.

WHAT DO GREEN PEAFOWL EAT?

The natural diet of this bird consists mainly of seeds, insects, reptiles, fruits, and small animals. It is similar with the two other peafowl species. Because all peafowl are omnivores. Generally, their diet consists of plants, flower petas, seeds, ants, termites, locust, and ticks. Besides, they can also eat small reptiles, arthropods, and even amphibians. The green peafowl is also often called the ‘Dragonbirds’  due to their ability to hunt venomous snakes.

Among peafowl species, the green peafowl are powerful flyers that cover long distances as they are able to travel from their deep forest roost to feeding sites in marsh pastures and even long river banks. More information about flying ability you can read peacock flying.

The young peafowl called peachicks are born with fully feathered condition. They are able to fly within a couple of weeks. They should learn to fly quite soon in order to stay with their mothers when roosting in trees. So, they can avoid the predators by following their mother roosting.

WHAT IS GREEN PEAFOWL STATUS?

After knowing the green peafowl facts, are you interested to this species? Don’t be in a hurry. One most important thing about this species is the status. The green peafowl is listed as Endangered (EN) on the IUCN Red List. Therefore, if you are going to keep or raise this bird, you should accomplish the appropriate procedure legally.

WHY ARE GREEN PEAFOWL ENDANGERED?

The green peafowl is considered as the endangered species. People usually hunt this beautiful peafowl for meat, feathers, eggs, and also chick collection. The other causes are the human disturbance and the destruction of their habitat. In other words, these threats involve large decline to this birds. There are between 5,000 and 1,000 individuals are estimated to survive in the earth.

Due to this reason, some captive breeding programs or natural conservation foundation have been established and activated in order to protect this superb bird. In addition to protect their existence, those programs also aim to reintroduce the green peafowl to other countries.