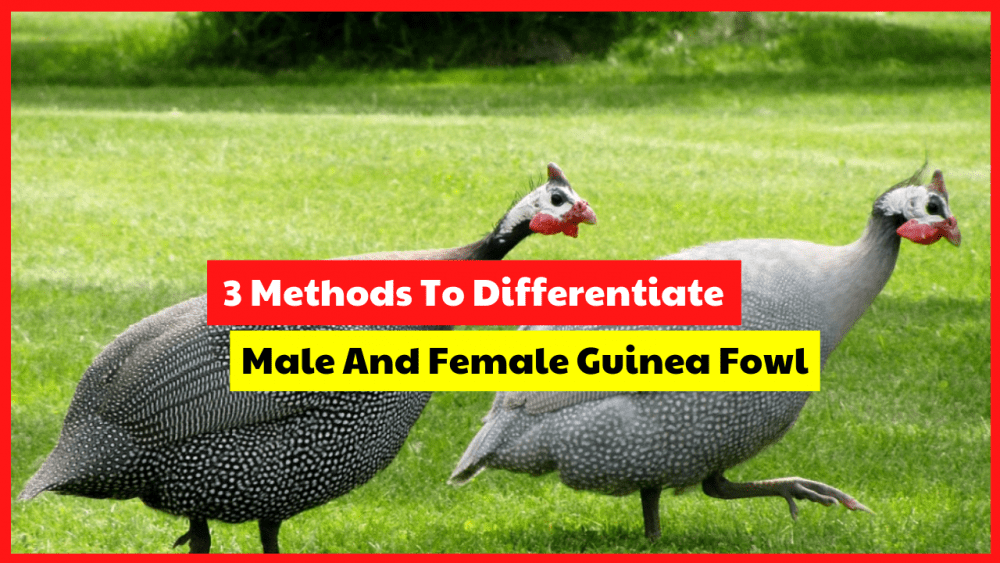 Well, guinea fowl is a kind of bird which is becoming increasingly popular. Not only tender and flavorful their meat is, but guinea fowl can also protect the farm flock from predators. They have ability to serve as pest control. Even, they can reduce deer tick population which is responsible for Lyme disease. It is not difficult to raise guinea fowl. But still, you need to be aware of their sexes so that you can control their population.

Then, How To Differentiate Between Male And Female Guinea Fowl?

Differentiate between guinea fowl male and female is quite difficult. It is hard to tell the keets apart until they are at least 8 – 10 weeks. According to poultry gurus, the male guinea fowl have a unique sound and only one-syllable call which sounds like they are saying ‘chi’. Meanwhile, the female guinea has a two-syllable call which sounds like ‘buck-wheat’. Nevertheless, it is still difficult for people to identify the sounds. This is why if identifying their sounds do not help much, so you need to wait them grow at least 8 weeks. At this age, their appearance will show the gender difference between guinea fowl male and female. For more details, let’s see the explanation below.

First, you need to wait until the guinea fowls reach age at least 8 weeks old to determine their vocalizations. If you have young guinea fowls (read: guinea fowl baby),  you can wait them around 2 months old before listening to their calls.

Second, listen to the male guinea fowl call. The males usually make a one syllable call that sounds like ‘chi’. Their call will either be a chirp or a yelp repeated at varying intervals.

Third, listen to the female guinea fowl call. When you are doing this, it can bit little bit tricky because they can also make one syllable ‘check’ sound which is same with the males. They can also make two syllable call in various way such as ‘buckwheat’, ‘put-rock’, or ‘qua-track’.

Method 2 : By Examining The Wattle And Helmet

First, recognize the wattles. Do you know wattles? This is the flaps of skin which hang from a bird’s head or neck. Even though the guinea fowl male and female look so similar, but it is possible to tell the gender by recognizing the wattles.

The adult males usually have large and elongated wattle which fold upward toward the upper jaw. Meanwhile, the females’s wattle usually will look fairly flat. It is also smaller than the male’s.

Second, observe their helmet. As we know that a guinea has a helmet which is also known as casque. It is a prominent horn-like structure on the top of their head. The male’s helmet is usually larger than the female’s which tends to be short and narrow. Nevertheless, be aware that the helmets can look so similar between guinea fowl male and female.

Method 3 : Observe the Wattle Color, Bumps in the Nose, and The Shape of the Helmet.

The males look very similar to the females. However, if you have keen eyes and sharp ear, you will possibly  be able to tell the difference. Well, the male guinea fowl is recognizable by the larger size of the wattles and helmet. The adult males are usually larger with bigger wattles and head furnishings. The helmet is the protrusion which sticks out from the tops of their heads, and the wattles are the giggly jowls which hang around their cheeks.

The females guinea fowl are quite different from the males in the terms of their call. As you already read previously, they tend to make a two syllable cry that should like ‘buck-wheat’. However, it can also be difficult to recognize the gender only by their call. Why? Because they also have tricky thing which is able to imitate ‘chi chi chi’ sound of the males quite easily. The easy way to recognize the females guinea is by their appearance which have smaller wattles and helmets and the males.

As the conclusion, it is indeed not easy to tell the males and females apart. Nevertheless, if you look closely in detail, you will be able to recognize the male guinea fowl by their more prominent wattles and larger helmet. Listening to their calls can also be a way to tell the differences. But, remember that it can also be trick when recognizing the females.

If you have a question just feel free leave the comment in the leave a reply form below.