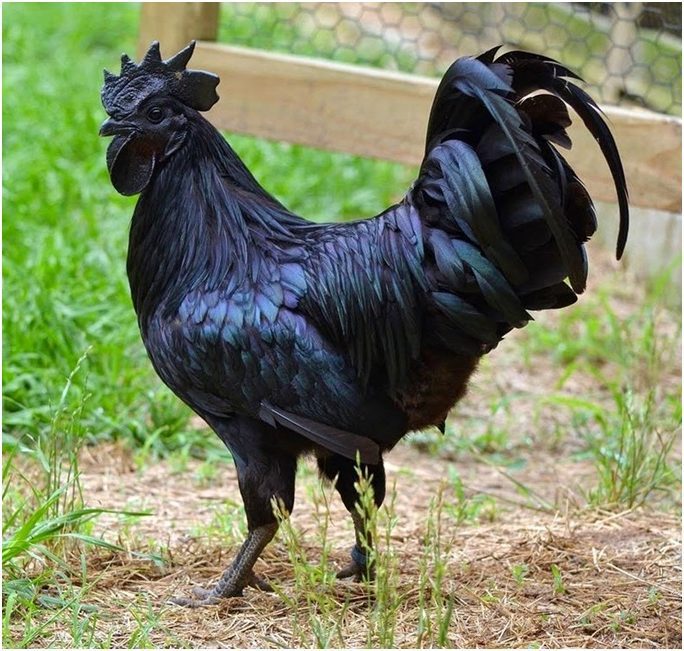 Have you ever seen a black chicken?

The Ayam cemani known in Asia for the mystical power of their black meat .this chicken has their own characteristic that very different from the regular chicken. It is believed that Cemani’s darkness makes it the ideal bridge between the human world and the supernatural world. Ayam cemain is ofthen used as the complementary ritual ceremony in the region of java. They believe that the black meat has magical power to resist the reinforcement of evil spirit. The chicken darkness is a genetic condition known as fibromelanosis caused by mutations that affect how pigment-producing cells work. thus making the appearance of cemani chicken very black, this Indonesian chicken is known for its black fur, black leather, black comb, black meat, black organ, and black bone!

Then Why is the Ayam Cemani chicken black?

The black color of Cemani’s chicken is the result of a genetic condition called fibromelanosis. This condition causes cell mutations known to function in the chicken’s body cells. according to the scientist, the mutated gene on the cemani chicken is an “endothelian-3” gene (EDN-3)this gene that makes the epidermal cell layer throughout the body of this chicken produce a black color (pigment).As you know chicken Cemani who have grown up and The number of EDN-3 gene increased more than 10-fold compared with ordinary chickens.Usually ayam cemani meat for sale because it has benefit as a stamina restorative medicine, ayam cemani taste delicious with the thick skin , the texture of the meat is soft, fatty, hardly muscled. Would you try it ?

Are you wondering on how to obtain a ayam cemani chicken?

the Quality of the Cemani Chicken eggs are very influential on the success for the hatch. So we are provide ayam cemani eggs for sale and provide the high quality of cemani chicken hen. Then Our eggs are certainly fresh so that they can last for about 10 days so that the high potential for successful hatched. we have our own Cemani Chicken breeders so we have adequate stock.

We are located on Jl. Palagan Tentara Pelajar KM 14, Maron, Donoharjo, Ngaglik, Sleman, Yogyakarta, Indonesia and further information you can contact us any time you need.