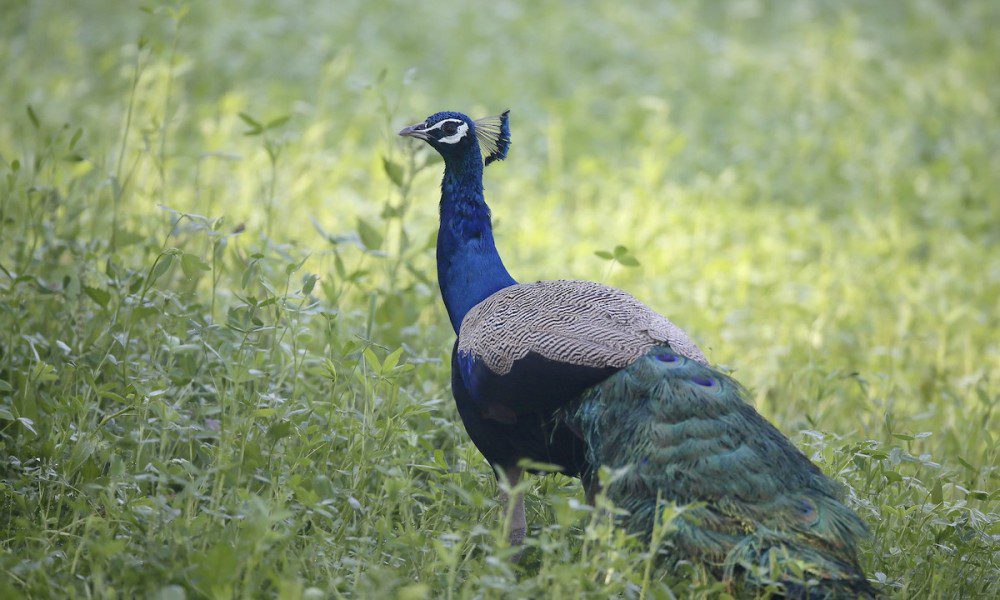 Indian peafowl – known best for the exquisite tail feathers makes Indian peafowl is so popular. Indian peafowl or also called blue peafowl, which has a scientific name Pavo Cristatus is one of the three species of peafowl. They are so beautiful as they have shiny dark blue feathers. This article is about to give some Indian peafowl information along with interesting facts and images.

Well, peafowl is a kind of bird, among the largest of all birds that fly. They consist of several species with vary combination colors. However, the most popular one is Indian peafowl. Most people are familiar with this bird since they can be easily found in many zoos and parks. The best attraction of peafowl is when they are displaying a spectacular fan of brilliant colors! The beautiful feathers covering the tails of a peafowl are longer than the bird’s body. Those long feathers actually grow from the bird’s back, not the tail.

But do you know that only the male peafowl that have such beautiful feathers? The female doesn’t have long tail feathers. The males are called peacocks, while the females are called peahens. Then, together they are peafowl. However, people usually use the term peacock to refer both males and females. More specifically, they sometimes use the the terms male peacock and female peacock to mention the different gender. So, the following is the correct terms of peafowl :

To know more facts about peafowl you can open peacock bird.

Indian peafowl is a peafowl species native to India and Sri Lanka, in South Asia. But they have been introduced to other countries usually as exhibits in zoos, parks, and nature centers or as domestic pets. You can find them naturally in Pakistan, Burma, Java, Malaya, Kashmir, Nepal, Assam, Nagaland, Ceylon, etc.

Watch next :
What Do Peacocks Eat? : The Food Differences Between Peacocks Living In Native Habitat And Peacocks In Captivity

The Indian peacock has very flashy feathers, with a bright blue head and neck. Meanwhile, the Indian peahen is a drab, mottled brown in comparison. Here to see the Indian peafowl images  to know the physical difference between the male and female :

Moreover, there are three variations in the Indian peafowl. Here are they:

The white feathered peafowl  has totally white colors from the top of the head to the end of the train, except for the eyes which are brown. But it is not albinos since they are true breeders (once white peahen mates with another white peacock, the peachicks will be all white feathered as well).

This is another version of Indian peafowl with random white feathers appearing in the feathers. this is the result of an incomplete dominant gene, and is an allele of the white gene.

The different mutation causes another variation result which is black-winged peafowl. The color mutation is in dark feathers with blue and green tips.

HABITAT : Where Do Indian Peafowl Live?

This blue peafowl has a range that includes India, Pakistan, and Sri Lanka. Their habitat is in the forest and rain forests, but you can also find them in the urban gardens and also zoos.  At night, the peafowl lives in the trees. They usually roost overnight in large groups in high and open trees. With this way, they are safe from any predators during the night.

In the morning, they break up into small groups and will like to roam the land area.  This is time for them to look for some food. What do Indian peafowl eat? Well, a group of peafowl forages on the ground each day looking for grain, insects, small reptiles or mammals, leaves, seeds, berries, and flower parts. During the normal season, these are usually groups of all peacocks or all peahens. Then, during the mating season the groups usually consists of one peacock and several peahens.

Watch next :Peacock Egg Information : Do You Want To Hatch The Peacok Eggs Naturally Or Artificially Using Incubator Machine?

During midday, they drink, preen their feathers, and then rest in the shade. Once the whether cools down, they go back to foraging for food before taking one last drink, and then go back to their roost for the night.

From those three, green peafowl  is the only endagered peafowl species in the earth. Their population has declined dramatically during the 20th century leading to regional contraction and also local extinction. The conservation population estimate for green peafowl is about 5,000 – 10,000 individuals in 1995. Recently, the study showed in 2016 to be around 15,000 – 30,000. This number includes the juveniles and the adults.

Due to the quick growth of human population, all peafowl species face the loss of natural habitat and access to the water sources. The national parks are working hard to protect their habitats in India and nearby countries considered native to them.

Because Indian peafowl is so thoroughly woven into many cultures and condition, they face little threat of becoming endangered. They are so adaptable, and has been introduced to different countries to extend its range. Moreover, there are also a large number of aviculturalists who successfully raise and breed this species as house pet.