Know The Pheasant Sounds And 3 Considerations Before Keep Pheasant! 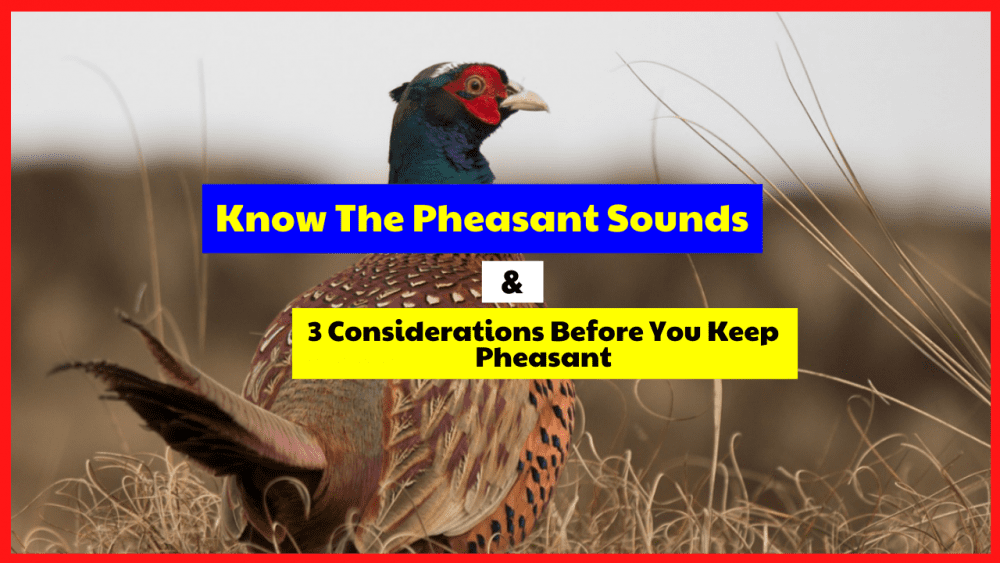 Pheasant Sounds : Are They Noisy? Consider This Well Before You Keep Pheasant In Your Backyard

Pheasant sounds – Before you decide to keep pheasant as your pet, you will possibly need to consider several things.

One of them is to observe and make sure whether their behavior suits with your environment or not.

In this article, you are about to find information about pheasant sounds as one of the 3 things consideration to keep them as house pet.

What Should You Consider Before Buying Your First Pheasant?

Even though the pheasant’s size isn’t too big, it has a pretty loud sound.

They have a voice that is loud enough not without reason, but there is a certain purpose. Male pheasants can use it to attract the attention of their partners when the mating season arrives.

As for the female, their voices can give instructions to their children whether it’s a call to gather them back or a sign of danger.

What Are Pheasant Sounds?

Like other birds such as guinea fowl, pheasants have a unique sound. The pheasant especially roosters are noisy.

According to some pheasant owners, the male pheasant calls can be noisy and disturbing. So, you have to consider how close your neighbors live to your property.

Their calls can be as loud as a cockerel at dawn that can wake you up. Unlike the male pheasant, the female pheasant sound are rather quiet.

They make a sort of peeping noise which sounds a lot like a little chick.

The pheasant cocks ‘crow’ throughout the day all year round, especially at dawn and also dusk in springtime. What’s the difference between male and female pheasant sounds?

The males utter a series of loud, excited two-note calls when they flush. In the other hand, the females use one call to signal her brood to hide from danger, or another to call them back together.

After considering the pheasant sound factor, there are other factors such as the presence of the cage and also the safety of the surrounding environment.

Even though the male pheasant sounds are loud and noisy. Many people still hunt this bird due to their beauty and the ease to maintain

Pheasants are animals that are quite active in moving around. When you decide to keep them in a cage, you have to adjust to provide enough space for them to move.

In their natural habitat, they also actively move on the ground in search of food such as grains and insects.

You can put your pheasant in a cage that is wide enough and there is a place to perch.

For the floor of the cage, you can make it sand or earth floor because the pheasant will like it.

They are accustomed to living on the ground to find food and when in a cage, you can feed it by spreading it on the cage floor.

Or you can also place it in the feed container that has been provided. Although pheasants have wings and are similar to birds, pheasants can fly even though they rarely do it.

When you raising a pheasant, even though you have prepared a cage, you still have to be careful with the presence of predators.

Like a mouse that will eat your pheasant eggs and also food in the cage that you have prepared for your pheasant.

After Considering The Three Things Above, Is Pheasant Worth to Keep?

Pheasant is a large long-tailed game bird. They have fairly long legs, a small head, long neck, and plump body.

Many people consider that this bird can be a great option to be kept as house pet at your home.

There are about 50 species of pheasant in the world. The most-known species are Ring-necked Pheasant, Golden Pheasant, Lady Amherst’s Pheasant, Sliver Pheasant, Reeve’s Pheasant.

And each of them has different special characteristics. But there is one thing very certain: they have beautiful appearance (especially the males).

With their attractive plumage, they are great addition to any aviary. They are also easy to maintain.

If you let them free range, they will forage on the grounds where they find waste grain, seeds, or insects when available.

With its stunning beauty, naturally, pheasant is worth to keep. However, you must pay attention to the three points above and make sure you get permission from your neighbor.

Because it is not impossible that your neighbors will feel disturbed by the sound of your pheasant.

In addition, the existence of the cage and the surrounding environment is also important. So, make sure you have considered all the factors above before keep a pheasant.

Are you going to keep pheasant at your home?

It’s no doubt that pheasant is a beautiful bird with some interesting personality qurks.

Before you raise this stunning bird, you are suggested to consider several factors. One of the is the pheasant sounds.

As you already read in this site, pheasant sounds can be noisy,  especially for the cocks. So, make sure that you are ready for this and your neighbors don’t mind with this.

If the fact is your neighbors are disturbed, so you need to keep the pheasant away from them.

Provide the correct aviary and place to roam where the pheasant sounds will not be heard by your neighbors.

So, are you interested in maintaining a pheasant? Hopefully this information from us will be useful for you.

For more information, please enter your comment in the ‘leave a reply’ box below.