The Top 5 Most Popular Types Of Pheasants In The World

The Top 5 Most Popular Types Of Pheasants In The World 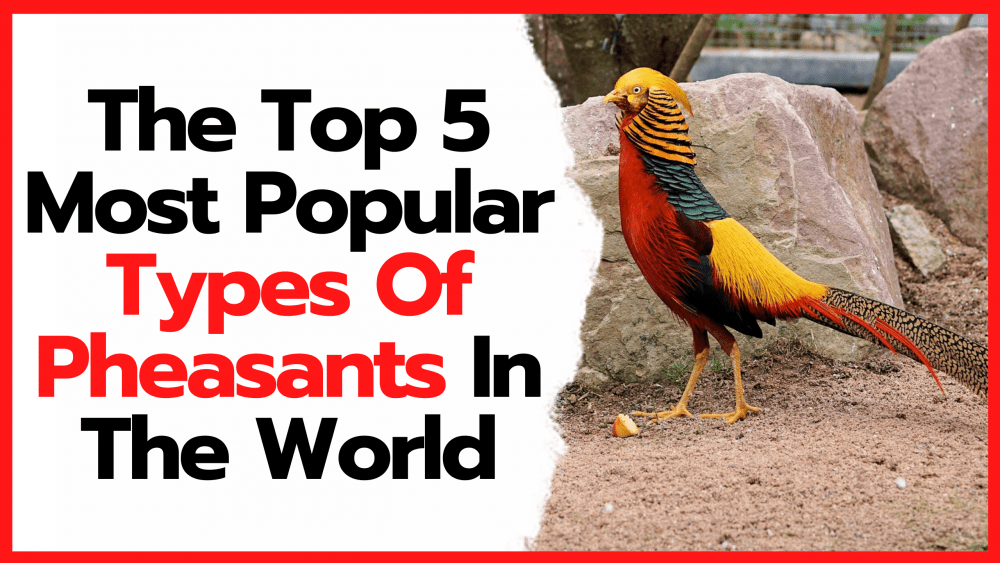 Types of pheasants – There are many different types of pheasants in the world, approximately 49 species, and even more subspecies of them. This bird is one of te oldest game birds recorded in the history. The male pheasants are best known for their bright colors and bold plumage. Meanwhile, the females are much smaller with dull-colored feathers. In this articles, some most popular types of pheasants will be explained. So, keep reading to know one by one.

Let’s Get To Know The Pheasants!

Not only known  as one of the oldest game birds in the world, pheasants are also popular with their plumage beauty, especially the males. They originated in Asia and can inhabit a wide variety of terrain from snowy mountains to the steamy jungles. They are able to live in wetlands, farmlands, scrub, and jungle.

Pheasants are large long-tailed game bird that are similar in physiology to the chicken with stout bills. Most of these species have long, strong legs with four-toed clawed feet. Then, their legs and bills are adapted to scratch and look for food in the ground.

There are some pheasant facts that people still wonder about. For instance their flying ability. Can a pheasant fly?  They are able to fly swiftly, but cannot sustain for long time. When they sense a danger, they prefers to use their legs to run from it. They are short-distance flyers and are usually hunted by the huntsmen with a gun dog that retrieves the killed pheasants.

The 5 Popular Types of Pheasants In The World

Common pheasant, also known as ring-necked pheasant, is native to Asia and has been widely introduced elsewhere as a game bird. And they have been successfully introduced in other parts of the world including North America.

The males plumage are vibrantly colored with blue-green heads, red face wattles, and also distinctive white neck rings. Meanwhile, the females are rather plain buff brown. But both males and females have long and pointed tails.

This species prefers to fields and farmlands with brushy cover. Nevertheless, they also inhabit woodland undergrowth and some wetlands. They like to stay on the ground, where they forage for food such as grains, seeds, berries, insects and small animals.

The golden pheasant is know as one of the most beautiful birds in the world. Sometimes, this bird is also reffered to the Chinese pheasant. They are native to the mountainous forests of Western and Central China. They prefer dense forests, woodlands, and sparse undergrowth as their habitats. This bird mainly feed on the ground on grains, invertebrates, grubs, berries, and seeds as well as other kinds of vegetation.

Many people do fall in love with this species due to their spectacularly brilliant plumage. The male and female golden pheasant look so much different in appearance. The males can be easily recognized by their beautiful and bright coloring. They have golden crest tipped with red which extends from the top of their heads, down their necks. Their face, throat, chin, and the sides of the neck are rusty tan. They have bright red underparts, dark colored wings, and also a pale brown, long, bared tail.

Meanwhile the females are less colorful and more duller than the males. They have a mottled brown plumage, pale brown face, throat, breast and sides. They are more slender than the males in appearance.

Reeves’s pheasant is a large pheasant which is endemic to the evergreen forests of central and east China. The birds got its name after the British naturalist John Reeves first introduced live specimens to Europe in 1831. They have been introduced to Hawaii, USA, Czech Republic, France, and also UK.

Unfortunately, the Reeves’s pheasant is evaluated as Vulnerable on the IUCN Red List of Threatened Species. The ongoing habitat lost, and over hunting for food and its tail plumes are the reasons for this case. Until now, it is estimated only around 2000 birds remaining in the wild.

This large pheasant has a scaled golden body plumage, grey legs, brown iris and red skin around eye. Its head is white with a black narrow band extends from the eyes. The males are very eye-catching for they have an extremely long silvery white tail barred with chestnut brown. On the other hand, the female is rather plain in comparison – with a mainly brown plumage, a blackish crown, buff face and grey brown barred tail feathers.

Moreover, this spectacular pheasant is memorialized in the Guinness Book of Records for having the longest natural tail feather of any bird species.

Silver pheasant is one of most popular types of pheasant. They can be found in forests, mainly in mountains, of mainland Southeast Asia, and estern and southern China, with introduced populations in Hawaii and various locations in the US mainland.

The male silver pheasant is white with black barring, black neck, throat and belly. They also have black crest, red wattles, and yellowish-grey beak. On the other hand, the female is mainly brown with brownish-grey barring. They have lighter greyish-brown neck, throat, and belly. Also brown crest, red wattles, and yellowish-ivory beak. Both of them have a bare red face and red legs.

As omnivores, silver pheasants forage for seeds and plants as well as insects and worms. And like many other pheasants, they prefer to inhabit high-altitude forests.

Lady amherst’s pheasant is native to southwestern China and far northern Myanmar, and has been introduced elsewhere. This bird is named after Sarah Countess Amherst, the wife of Sir William Pitt Amherst, the Governor of Bengal who was responsible for sending the first specimen of the bird to London in 1828.

The male is very colorful with an extremely long black and white tail, greenish back, red and yellow rump and also black-an-white neck ruff. Meanwhile, the females are drab for camouflage. The female is much less showy, with a duller mottled brown plumage all over. They are similar to the female golden pheasant, but has a darker head and cleaner underparts than the female of that species.

Moreover, this bird is very difficult to see in their natural habitat such as dense, dark forests with thick undergrowth. The Lady Amherst’s pheasant is evaluated as Least Concern on the IUCN Red List of Threatened Species.

Black pheasant is also popular due to their mysterious facts that so far people are still looking for. Some sources mention that this species refers to the melanistic mutant. They are large, beautiful birds feature an iridescent and greenish-black plumage.

The black pheasant display an incredible ability to survive and also reproduce in the wild. The prime habitat consists of 55 up to 70% crop fields such as corns, soybeans, or small grains. They mostly inhabitant in some wetlands, grasslands, and woodlands or brushy thickets.

For more information, please enter the ‘leave reply’ box below.