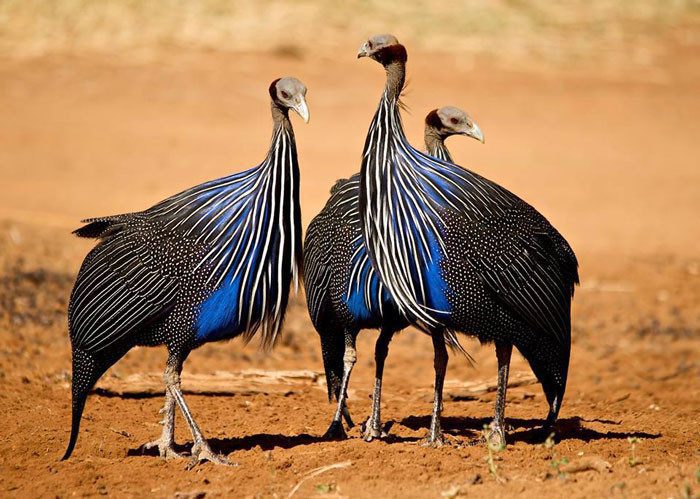 
Guineafowl are birds of the family Numididae in the order Galliformes. They are endemic to Africa and rank among the oldest of the gallinaceous birds.

Guinea fowl is a large African game bird with special white-spotten plugame and have loud call.  This bird is a type of poultry from the Phasianidae family.One of the special characterisitcs of guinea fowl is the small white spots in their plumage. In addition, this bird also has noisy sounds. In some countries, guinea fowl has been raised for meat and eggs. But for those who know what this bird is useful for, they would like to keep the guinea fowl as safeguard birds that can prevent pests or bugs in your garden or backyard.  Even, they can also help your problem with snakes. (Read more: guinea fowl and snakes)

Here are 5 types of guinea fowl in general that you may need to know :

The vulturine guinea fowl is the largest extant species of guineafowl.  The adult species can reach for 61 – 71 cm with a round body and small head. They get the name ‘vulturine’ from their unique appearance. They have bare skin of head and neck which makes them very similar to vultures. In spite of their bald head, the vulturine guinea fowl shows a really beautiful plumage.

They have longer wings, neck, legs, and tail than the other types of guinea fowl. The adult has dark grey body plumage, heavily but finely spotted white.  The tapered tail and the wings show the same pattern, but the secondary flight feathers are edged lilac.

Then, the slim neck projects from a cape of long, glossy, blue and white hackles. They also have cobalt blue breast. And the rest of their body plumage is black, finely spangled with white.  Moreover, the sexes between male and female are similar in plumage. The keets has some streaked down on the head. Besides, they also have duller greyish-brown plumage, barred and spotted, also brown and rutous.

For some people, crested guinea fowl is one of several types of guinea fowl that have unique appearance. This bird has distinctive black crest on the top of its head. Their plumage is overall blackish with dense white spots.

Moreover, they can grow approximately up to 50 cm total length. Crested guinea fowl can be found in the open forest, woodland, and forest-savanna mosaics in Sub-Saharan Africa. They are also popular with their aggressive temperament. So, it’s better for you not to consider this bird as ‘house-pet’ as you need to spend extra work to train them.

Similar with the general guinea fowl, this bird is also omnivorous. They consumes almost anything but their most favorite food is kind of insects, bugs, pests, seeds, berries, and many others.

The plumed guinea fowl is one of several types of guinea fowl that can be found in humid primary forest in the Central Africa. As you can see in the picture,  this bird resembles some species of the crested guinea fowl, but they have a straigter (not curled) and higher crest. They also have relatively long wattle on either side of the bill.

Furthermore, the bare skin on their face and neck is entirely dull gray-blue in the western nominate subspecies. Meanwhile, there are some species with orange patches among the gray-blue in the eastern subspecies schubotzi. According to Wildlife Journal Junior, the plumed guinea fowl is found in Angola, Cameroon, Central African Republic, Congo, The Democratic Republik of the Congo, Gabon, and Equatorial Guinea.

The Black guinea fowl is one of guinea fowl breeding which inhabits humid forest of Central Africa. They are shy and secretive species that people often hear but rarely see. Thus, the information related this bird is still difficult to get.

As the name implies, the black guinea fowl is totally black bird, with a bare pink head and upper neck. They also have crest and short downy feathers on its crown, and also a scattering of downy feathers on their lower neck. Both sexes of the black guinea fowl are identical in appearance, but the males are slightly larger. The body and tail feather are similar in color which is black with some paler speckled markings on the belly. the males have one to three spurs on the legs, while females either have none or a single short spur.

The black guinea fowl keets are also similar, but have buff tips to the feathers on their upper parts, a speckled breast, and white belly. They also have greenish grey beak and grayish brown legs.

The white-breasted guinea fowl is a distincive bird with a black body, bald red head, and white breast and neck. This is why they are called ‘white-breasted’. This bird is the rarest guinea fowl species in West Africa with very unique characteristic which is completely bald read head and upper neck, a white breast and collar, and a black body marked with very fine white lines.

The white-breasted guinea fowl has a fairly long tail, greyish-brown or greyish-black long legs. Meanwhile, the females are similar in appearance, but the males are slightly larger and has one or two spurs on their legs.

How about the keets?

The white-breasted keets are darker than the adult, with black patches that spread up it neck and onto its breast. They also have dark head. They have no white on the breast or collar but do have a white belly. Due to the ongoing habitat loss and hunting in some areas, this species is rated as vulnerable on the IUCN Red List.

There are still many species of guinea fowl which is considered from several things such as their colors differences.