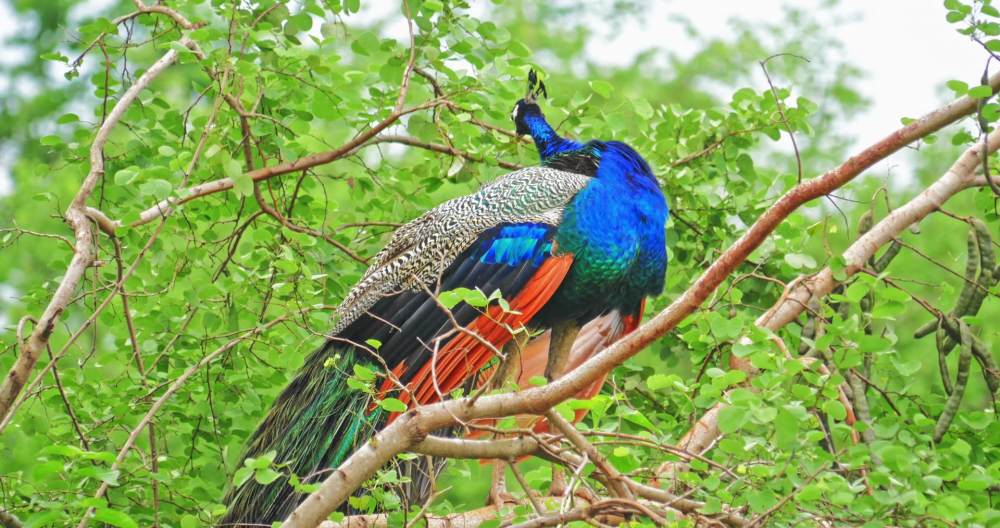 Peacock information – It has no doubt that when you see a peacock displaying their train (tail feathers), you will not be able to ignore it. Peacock is the male bird of peafowl, and the female bird is peahen. Together they are called peafowl. The shiny color of peacock feathers has attracted the attention of every single eye. Beauty, glory, royalty, holiness are only some words that represent peacock symbolism.

One most interesting fact about peacock bird is the colorful features. They are very well known for their brilliantly-colored tail feathers with the distinctive eye spots. The color can includes blue, black, green, gray, red, and orange. Indian peafowl is one of three peacock species that people are familiar with. Two other species are Green peafowl of Southeast Asia and the Congo peafowl of Africa.

Even though the peacock colors are vary, but the main body of peacock is bluish green in color. They have long and slender body with a long face which has black and white colors. Then, the peacock train can take up more than 50% of the overall body. The total length of a peacock can be more than seven feet from the head to the end of its train. And they weighs between 8 – 13 pounds.

Peacock Information : The Habitat and Distribution

There are three species of peafowl in the world with different origins. The genus Pavo consists of two species namely Indian Peafowl or Blue Peafowl (Pavo Cristatus) which exists only in India and Sri Lanka and Gree Peafowl (Pavo Musticus) which is spread throughout the Indochina palin, Malay Penisula and both the eastern tip of Java Island. Meanwhile, the last type belongs to the genus Afropavo namely Congo Peafowl (Afropavo Congoensis) that is endemic to the Congo, West Africa.

The peacock habitat is generally  in the dense, forest, farmlands, and warm regions. They tend to live in the locations where it provides easy access to low trees and plants. Besides, they also live in the regions where they have access to farm grounds for feeding, and water source as well. They actually tend to do better in warmer areas but they are so adaptive that can survive in cooler temperatures.

Peacock usually lives in small groups. Many people think that they can fly, but based on the peacock facts, they are weak flyers so they spend most of their time on the ground. Nevertheless, they usually roost overnight in the tall trees to avoid predator disturbance. In the morning, they love to forage on the ground and look for some food such as insects, small reptiles, grain, plants, frogs, etc.

The colorful tail of the peacock is spreading for some purposes. First, to attract the female during mating rituals. And second, to frighten the predators as if they are facing dozens of pairs of animal eyes. During the mating season, the peafowl will form a small group for a short period of time. They will generally live in groups consist of one male with several females around him. They don’t do well being around various domestic birds such as turkeys.

Peafowl are omnivores which means they can eat almost everything both meat and vegetation. But grain is the most common item that they like to eat. In the wild peacock can eat fruit, berries, grains, small mammals, reptiles, amphibians, small snakes, and insects. Ants, millipedes, termites, centipedes, crickets, locusts, scorpions are something they usually find in the ground.

Moreover, they can consumes fruits, seeds, grass, plants, and flower petals as part of their diet. However, those items are not always available for them to consume. In other words, they will take opportunity to eat everything they can gain access to.

Then, how to feed captivity peafowl? For captivity peacock can be given a supplemented feed. It is important to give them a high protein diet in order to maintain optimum health. Actually they can also eat cat food, nuts, cheese, scrambled eggs, and cooked rice. For your information, pet foods such as dry cat food or dog food contain additional minerals and nutrients. However, these foods are not recommended as the only diet for peacock. You can use these foods in conjunction with fresh or dried fruits, vegetables, and grains.

Unlike the peahen, peacock has beautiful long tail feathers usually called train. Do you know that this train is a part of mating rituals for a peacock to attract the peahen’s attention?

Well, males will do all they can to get the attention of females for mating. During the mating season, peacock will use their stunning shiny blue and green tail feathers to advertise their sexual and physical fitness. In this way, the peacock will display their feathers and prance around to catch the peahen’s attention.

Some study show that peahen is more interested to the males with large, colorful tail with many eye spots. However, the scientists were not sure what it was about the showy tails that attracted females. Scientiests who conducted a research using eye-tracking cameras to follow peahen’s gaze found that the female spend only 20% – 30% of their time looking at the displaying male. Meanwhile, the rest of time is used to look around for food or predators. It means that what a peahen sees from a peacock is still a mystery and still in the research.

For more information, put your comment on this reply box below!